TOKYO — The clash that erupted between Chinese and Indian forces in the northern Indian region of Ladakh on June 15 resulted in the first casualties suffered between the Asian neighbors in 45 years.

The reported details of the battle are quite bizarre. At an altitude of 4,000 meters, in freezing temperatures, the troops engaged in a physical fight; no firearms were used.

Through an exchange of blows with nail-studded clubs, stone-throwing, falls into a deep valley and being left injured in the icy climate, a total of 20 Indian soldiers died. Although Beijing has kept a tight lid on information, many are believed to have been killed or injured on the Chinese side as well.

There is a sufficient risk that the Chinese and Indian forces on the ground now harbor stronger grudges against each other. No phone call between foreign ministers can easily erase such a bloody skirmish.

While it is not clear which side initiated the actions, it is easy to imagine that news of the clash ruined Chinese President Xi Jinping’s 67th birthday, which fell on that day. The leaders took a walk together and sat side by side on a swing together, showing off their close relationship. They then attended a dinner to celebrate Modi’s birthday.

But during the feast, Modi suddenly received an inconceivable report. He was informed that Chinese forces had intruded into the northern part of India in the Kashmir region across the Line of Actual Control and were squaring off with Indian forces at close range.

The LAC is a loose demarcation that separates the two countries where their border is in dispute.

As soon as Modi received the report, he asked Xi what the intrusion was all about. It is said the Chinese side had not grasped the full details of the incident at that stage.

This was only two years into Xi’s rule, and suspicions were that the commander in chief had yet to take full control of the country’s powerful military.

Naturally, the incident ruined the atmosphere at the dinner ahead of an official summit between the two leaders the following day. During that summit, Modi vociferously demanded the Chinese troops’ withdrawal, deviating from his original scenario.

After that, the Chinese leader tightened his grip on the armed forces thorough highhanded measures that saw even the former top uniformed officers arrested one after another and high-ranking officers taking their own lives.

The last deadly clash between China and India came in 1975. Thirteen years earlier, in 1962, a large-scale armed clash erupted in the border area. Soldiers of the Assam Rifles arrive at Tezpau, India, on Nov. 25, 1962, during border clashes with China that ended with the formation of the Line of Actual Control.

During the 1966-1976 Cultural Revolution, China was in total chaos, leading to the deaths of countless people.

In 1969, China and the Soviet Union militarily engaged along their shared border northeast of Vladivostok.

In 1979, China and Vietnam fought a short but bloody war.

But after China settled on its “reform and opening-up” policy under Deng Xiaoping, prioritizing economic growth and fully normalizing relations with the U.S., the number of fatalities from conflicts between China and India dropped to zero.

This month’s clash, however, raises concerns that China may be returning to its thinking and actions of a half-century ago.

Since that untimely birthday skirmish in 2014, Xi has taken full control of the military. He unleashed his anti-corruption campaign on disobedient military personnel and spearheaded drastic organizational reforms. What if he is now itching to take a page out of the playbooks of Mao Zedong and Deng and test his military in a full-scale battle?

Today’s China is significantly different from what it was half a century ago. Its weaponry has been significantly upgraded, and any such adventurism would pose great danger.

Pent-up animosity between China and India pose another worry.

In 1998, when India conducted an underground nuclear test, a high-ranking Chinese Foreign Ministry official said publicly that India “should worry about the potatoes it feeds its own people first.”

Twenty-two years on, China and India have both grown into major countries and occupy important positions as emerging economies.

China, with 1.4 billion people, and India, with 1.3 billion, are the world’s two most populous countries, accounting for 35% of the global total. 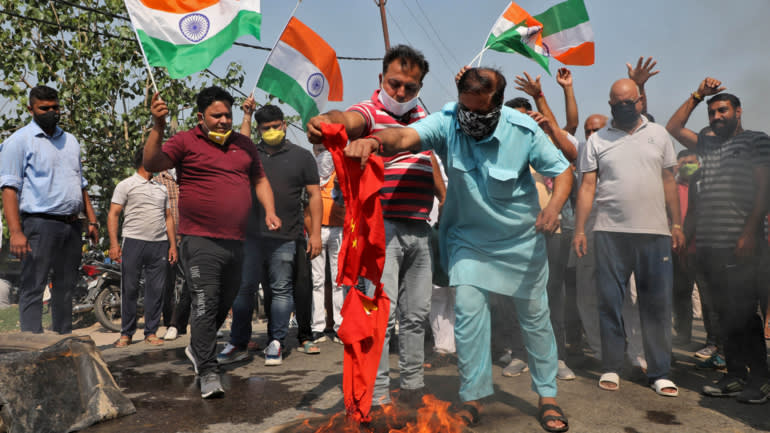 Demonstrators burn a flag resembling the Chinese national flag during a protest in Jammu on June 17, showing some of the animosity that has been building up for decades.

Meanwhile, China’s relative silence on the June 15 border battle is disconcerting. No casualties have been announced. Media reports about the clash are tightly restricted within China.

Even Hu Xijin, the hawkish editor-in-chief of the Global Times has remained fairly subdued, tweeting that India should not “misread China’s restraint as being weak.”

China’s reticence reflects the difficult situation it finds itself in.

China has spread its battle lines too thin by sowing seeds of friction everywhere, north, south, east and west.

To its east, across the Pacific, China is locked in a serious confrontation with President Donald Trump’s America.

To its south, China is militarizing the South China Sea. Beijing is also poised to introduce a national security law on Hong Kong that will undermine the former British colony’s current legal system.

In the northwest, China has come under fire from the international community over human rights in its Xinjiang Uyghur Autonomous Region. Modi and Xi in Wuhan on April 28, 2018. Before the coronavirus, Wuhan was best known for East Lake, one of China’s biggest tourist attractions.

Under these circumstances, China’s hushing of the latest military clash with India is understandable.

India, for years, has been highly alarmed by China’s “string of pearls” strategy of supporting the construction of ports in countries encircling India.

There is a possibility that the latest military clash will drive the traditionally “nonaligned” India to the U.S. side, which is pressing ahead with its “Indo-Pacific strategy.”

Tied by a strange destiny, Xi Jinping and Narendra Modi met in Wuhan in April 2018.

They took a walk together on the banks of East Lake, accompanied only by their interpreters, in a manner that reflected their close relationship.

It was Mao’s favorite retreat.

Little did they know that two years later, the city would become the epicenter of the coronavirus.

Today, India has the fourth-highest number of coronavirus cases in the world. If China is deemed to have exploited India’s ordeal, the emotional confrontation between the two countries will further escalate.