The 2019 Atlantic Hurricane Season exploded to life in September as nearly non-stop tropical activity stayed focused on the Western Atlantic. As the month wound down, a classic and powerful Atlantic hurricane spawned on the other side of the basin, just off the coast of Africa near the Cape Verde Islands. Hurricane Lorenzo went on to become a massive and intense Cat 5 monster, setting nearly every record in that half of the Atlantic along the way. As still-Cat 2 Lorenzo nears the Azores at press time, solid swell is heading to Europe — including the Quik Pro France — ahead of Lorenzo’s impending impact with Ireland and the United Kingdom by the end of the week.

When we say, “record-breaking,” we mean this: Hurricane Lorenzo is the strongest hurricane on record so far east and north in the Atlantic — think distance away from the Caribbean for perspective, since that’s where tropical systems often originate and/or pass by. Lorenzo is also the third major hurricane and second Cat 5 to form this season. There have only been seven years on record with two or more Cat 5s, four of those since 2005. We’re now above-average for this point in the season —  and with just one more named storm before the November 30th closing, the entire season will end up at least average in all major categories, from storm count to ACE (Accumulated Cyclone Energy).

As for surf, Lorenzo was a large storm that reached Cat 5 intensity, though it was far from land and not on a great track for Europe at its strongest. That means the eastern Canadian Maritimes, Greenland, Iceland, and especially the Azores will see the strongest swell from the Cat 5 period of Lorenzo’s life cycle. But the storm’s turn back toward Europe and its track towards Ireland will allow for a shot of solid (and rare) tropical swell to fill in across Europe later this week and into the weekend.

Portugal’s first up and is looking like the standout during the Lorenzo swell event as SW/WSW swell builds on Thursday, peaking from a more westerly direction on Friday before easing from the WNW over the weekend. Favorable to decent conditions should greet the solid swell with widespread 2- to 3-times overhead surf during the peak. (PS: Don’t expect Nazare to go bonkers — this isn’t a good direction to produce those XXL teepees.)

The swell direction is partially shadowed for breaks inside of the Bay of Biscay — including the Quik Pro France’s contest site in Hossegor. Look for a fast-rising west swell on Friday with sets up to double overhead before quickly dropping off over the weekend — but don’t worry, long-period west swell isn’t ideal for Southwest France anyway, and there’s a lot of non-hurricane surf already lining up for the event.

Comparisons to 2017’s Hurricane Ophelia are popping up as well, but there are some notable differences between the storms. For surf, even though Lorenzo was considerably stronger, Ophelia took a more favorable track under the Azores and towards Portugal. This directed swell at the region and brought the storm much closer. 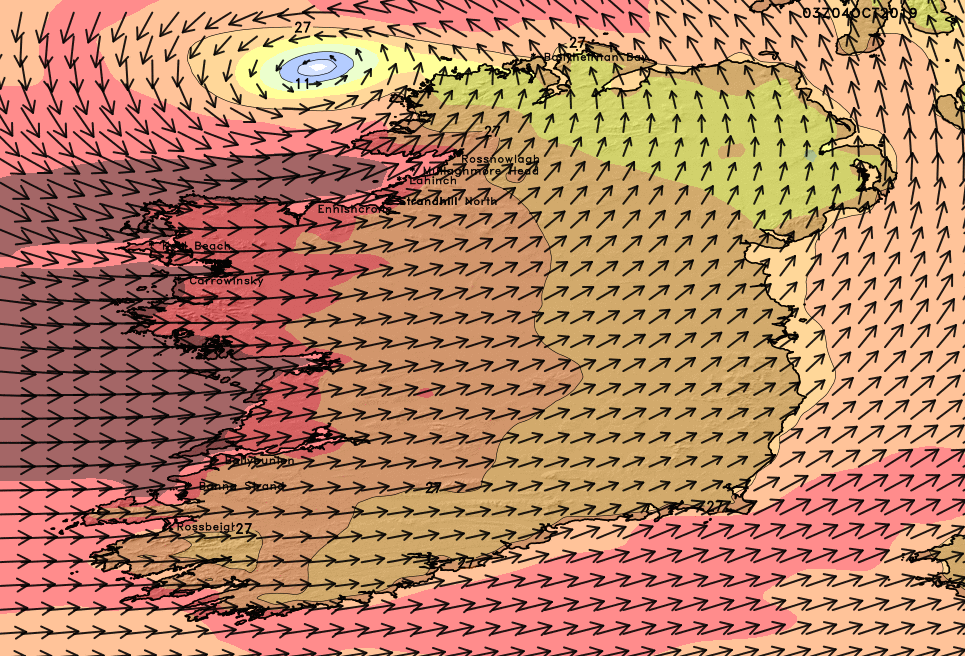 High res wind forecast for Ireland says Friday is not the day.

Lorenzo’s comparative storm damage in Ireland and the British Isles is yet to be determined but it is not expected to match Ophelia’s vigor — Ophelia registered the highest wind gusts on record for Ireland. According to the Irish Meteorological Service, Lorenzo will transition to an extra-tropical storm 1000km from Ireland, or double the distance away as Ophelia, before making landfall into Friday. If you’re looking to hunt surf in those parts, breaks that can manage an increasing SW/S wind on Thursday as conditions deteriorate might be your best shot.

Perfectly time your next surf

Get hourly wind and swell data for the breaks you care about. Get Surfline Premium.

Playing the Raiders is a big deal for Khalil Mack, and that’s good news...