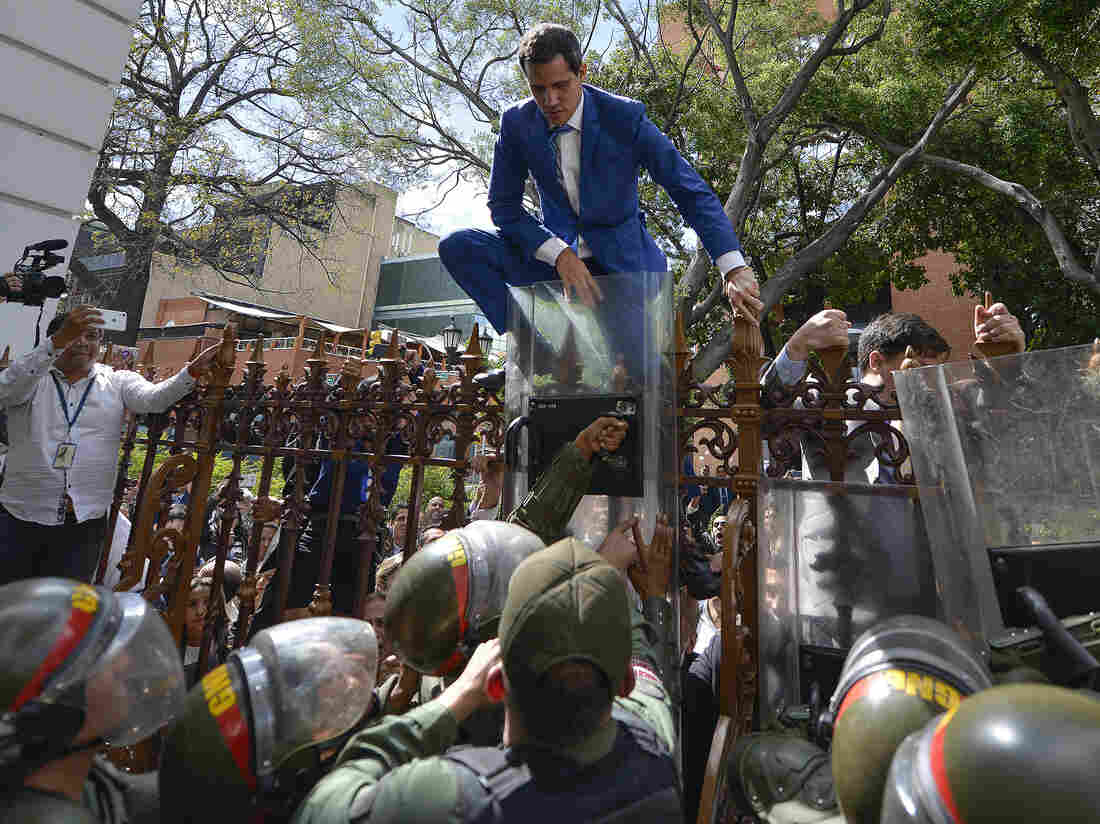 National Assembly President Juan Guaidó, Venezuela’s opposition leader, climbs the fence in a failed attempt to enter the compound of the Assembly, as he and other opposition lawmakers are blocked from entering. 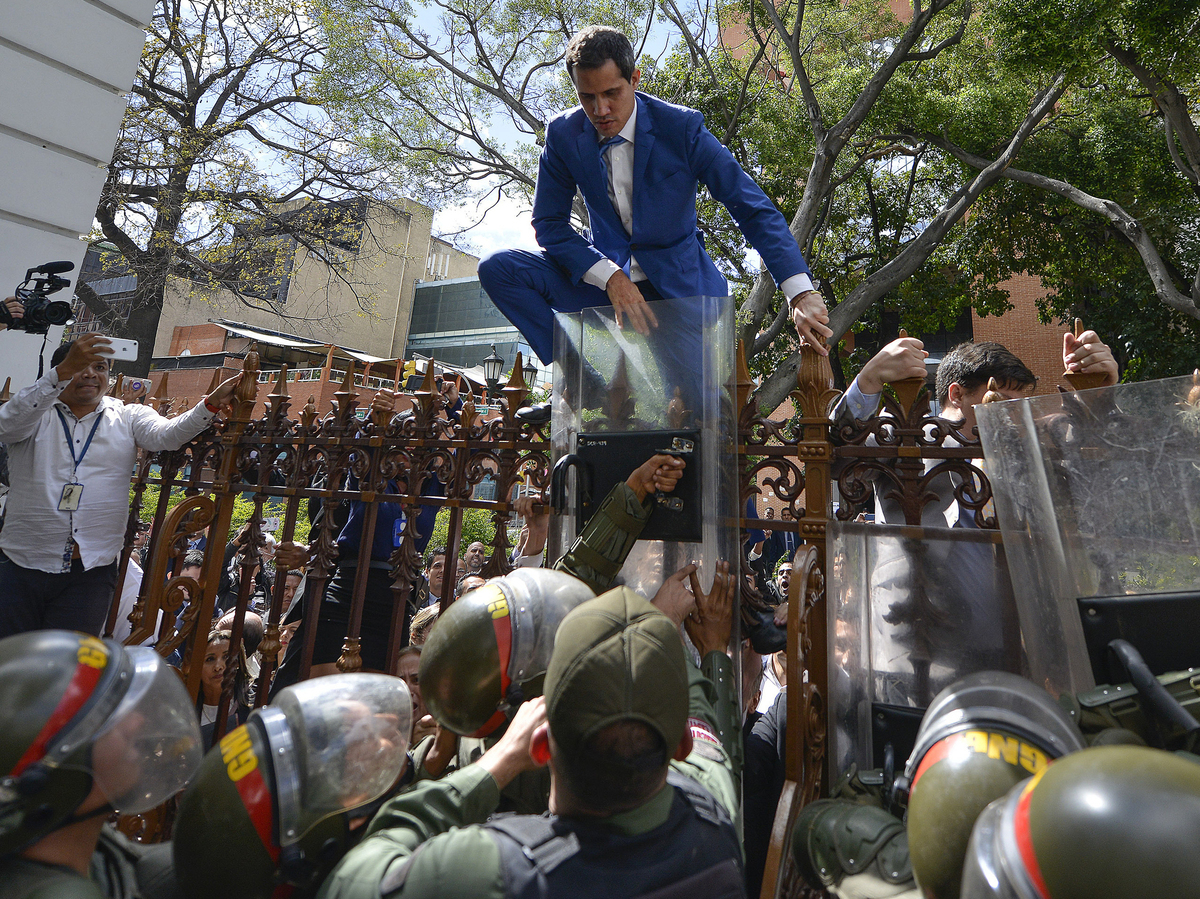 National Assembly President Juan Guaidó, Venezuela’s opposition leader, climbs the fence in a failed attempt to enter the compound of the Assembly, as he and other opposition lawmakers are blocked from entering.

Venezuelan security forces on Sunday blocked opposition leader Juan Guaidó from a special session of the National Assembly, where he was expected to be re-elected as the legislature’s leader – an apparent bid by President Nicolás Maduro to outmaneuver the man who has staked a rival claim to the presidency.

In Guaidó’s absence, supporters of Maduro elected one of their own to head the body. Hours later, however, a majority of National Assembly lawmakers met in emergency session elsewhere, re-electing Guaidó and accusing Maduro of attempting a “parliamentary coup.”

Speaking to reporters outside the National Assembly building, Guaidó called Maduro’s supporters “traitor lawmakers” and accused them of “assassinating the republic.”

Maduro was re-elected in 2018, but the vote was widely seen as fraudulent.

The latest crisis comes nearly a year after Guaidó, who ran against Maduro, declared himself the country’s acting president with the backing of the Assembly. Guaidó quickly received recognition from the U.S. and nearly 60 other countries as Venezuela’s legitimate president.

But Maduro, who enjoys near dictatorial powers in the South American country, has tenaciously held onto power.

When Guaidó arrived for the vote on Sunday, Venezuelan National Guardsmen equipped with riot gear prevented him from entering. In an ensuing scuffle, Guaidó’s suit was torn. At one point, the opposition leader tried to enter the assembly by jumping an iron fence that circles the building.

Other opposition lawmakers were reportedly delayed or prevented by security forces from reaching the legislative session, giving supporters of Maduro a temporary majority. Without holding a formal vote, they selected Luis Parra, a member of Maduro’s United Socialist Party of Venezuela, who was sworn-in as leader of the body.

Later, lawmakers allied to Guaidó gathered at the El Nacional newspaper, which is critical of Maduro, and 100 of the legislature’s 167 members voted to re-elect Guaidó.

“The dictatorship has once again committed another mistake,” Guaidó said shortly after being sworn in, according to The Associated Press.

In Washington, Secretary of State Mike Pompeo congratulated Guaidó, referring to him as the country’s interim president and condemning “the failed efforts of the former Maduro regime to negate the will of the democratically elected National Assembly.”

“For months corrupt regime officials have engaged in an unlawful, violent, and despicable campaign of arrests, intimidation, and bribery to destroy the last democratic institution in Venezuela, the National Assembly, and to prevent elected members of the National Assembly from casting their votes freely and in accordance with the views of their constituents,” Pompeo said in a statement.

Maduro, who has vowed to win control of the National Assembly in elections later this year, praised the move to shut out his rival. Speaking on national television Sunday night, he said Parra’s election represented “a rebellion” and “rejection” of Guaidó.

Sunday’s events leave open the question of who controls the legislature and the fight for control is likely to continue.

Parra has already sought to exert his authority, calling an assembly session on Tuesday.