CINCINNATI, Ohio – Some say he was bullied, others say he was the bully.

A day after 24-year-old Connor Betts shot and killed nine people in Dayton, including his younger sister, varying portraits of the shooter emerged from those who knew him.

One former classmate said Betts had been ostracized in their small school district, once escorted off the bus by police. He said students worried Betts might do something terrible.

Others scoffed at the idea Betts had ever been targeted. A drama club student during his time at Bellbrook High School, another former acquaintance said he was shocked by the emotionless way Betts once choked a girl he had dated.

Another former classmate told The Enquirer in an interview that Betts had threatened to kill her multiple times when they were in a school musical as seniors. But the classmate, Eva Lewis, didn’t speak up because she didn’t want to encourage his behavior even though she was on Betts’ “kill list.”

“It felt, like, too real,” Lewis said. “He was being so forward that it would shock you into not saying anything.”

Police spent much of Monday outside the Betts’ home in suburban Dayton. Bellbrook’s police chief said the parents inside were victims, too.

Gathered nearby, reporters asked the chief about a hit list and whether more could have been done to prevent the carnage that unfolded early Sunday morning. He didn’t have many answers.

What we know: At least 9 dead, 27 injured. Victims identified

When he was a teenager, Taylor Ford went to summer camp with Connor Betts.

As he thinks back on it now, Ford remembers a violent incident at a school playground more for the emotionless way Betts handled it than the bruises Ford said he left on his friend’s neck.

It happened one day after camp in Yellow Springs, when Ford was 15 and a girl who had been dating Betts came to visit. Ford said he was talking on the phone, about 30 yards away from Betts and his friend, when the two seemed to disagree on something.

“Two or three seconds later, without any provocation, Connor grabbed my friend by the throat and started to choke her,” Ford said. “I remember very clearly the bruises on her neck in the hours after this happened.”

Ford, now 24, recalled running away from Betts with his friend.

“He stared at us without any emotion,” Ford said.

And that’s what scared him the most. Ford said Betts was “almost blank-faced, stone-faced the entire time.”

“I discouraged all my friends from having relationships with him because I thought he was very dangerous,” Ford said.

While he saw Betts on a few occasions afterward, Ford said he did not have any contact with Betts after that day.

The Associated Press reported that classmates said he was suspended at Bellbrook High School for compiling a “hit list” of those he wanted to kill and a “rape list” of girls he wanted to sexually assault.

Both former classmates told The Associated Press Betts was suspended during their junior year at suburban Bellbrook High School after a hit list was found scrawled in a school bathroom.

That followed an earlier suspension after Betts came to school with a list of female students he wanted to sexually assault, according to the two classmates, a man and a woman who are both now 24 and spoke to AP on condition of anonymity out of concern they might face harassment.

The discovery of the hit list early in 2012 sparked a police investigation, and roughly one-third of Bellbrook students skipped school out of fear, according to an article in the Dayton Daily News.

Superintendent Douglas Cozad declined to release school records relating to Betts, citing student privacy laws. Police also had no records to release, other than a crash report, citing the expungement of sealed records.

Chris Baker, a former Bellbrook High School principal, was asked about the hit list appearing on a bathroom wall at the school.

“I would not dispute that information,” Baker told the Dayton Daily News, declining further comment.

Betts no longer has a record in Greene County Juvenile Court. It was sealed and then expunged, officials said.

Under Ohio law, all sealed juvenile records are automatically expunged after five years or when the person turns 23, whichever happens first. A person can also apply to have their record expunged, which means the documents and any record of a person being charged are destroyed.

Betts had no criminal record, other than traffic offenses, and would not have been prevented from buying the gun through a background check. 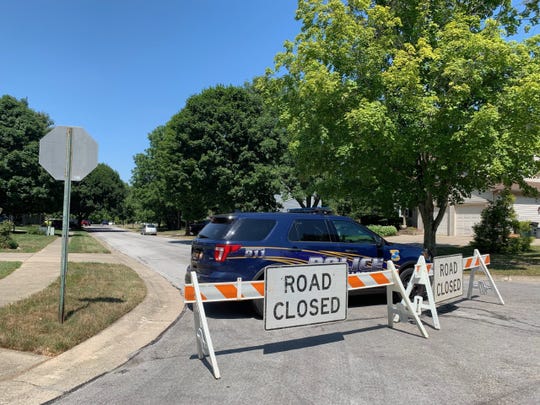 Police blocked off the street of Moira and Stephen Betts in the Dayton, Ohio suburb of Bellbrook. Officials searched the house after the Betts’ son, Connor, was accused of killing nine people and injured 26 in a shooting spreed in Dayton early on Aug. 4, 2019. One of the dead was the Betts’ daughter, Megan, 22. (Photo: The Enquirer)

Betts was the lead singer of a metal band called Menstrual Munchies, according to BuzzFeed News.

In an article, BuzzFeed described the metal band as “pornogrind,” a genre of music often defined by lyrics of sexual violence. The band’s song titles also are extreme and explicit, sometimes referencing sexual abuse of a corpse.

The band performed as recently as June 29 in Chicago, according to BuzzFeed News. The band’s Facebook page appears to have been taken down.

The victims: Suspect’s sister among the dead in Dayton mass shooting

Other classmates speak out

One classmate said Connor Betts had been bullied in high school and responded by making a hit list.

“He had a plan to shoot up the high school,” said Laura Wakeley, who attended Bellbrook High School with him.

Theo Gainey lived in Betts’ neighborhood until 2017. He spoke to reporters outside his parents’ home on Monday and said his graduating class of 205 people never forgot the allegations he had a hit list.

“Ostracization is a form of bullying,” Gainey said.

Not everyone who went to school with Betts had bad things to say. Brad Howard told reporters in Bellbrook on Sunday he was friends with Betts from preschool through their high school graduation.

Betts was a student at Sinclair Community College in Dayton, though he was not enrolled at the school for the summer. According to his LinkedIn page, Betts’ work history included stints at Chipotle Mexican Grill and a gas station in Centerville, Ohio.

In an email to employees, Chipotle officials said they are working with law enforcement and are offering “full support” to employees who worked with him.

The Matrix is returning to theaters to celebrate its 20th anniversary