From right, Stephanie Fortune, Logan Dominie, Katherine Harriman and Sandra Kwasniak cross the graduation stage at the end of Tupper Lake’s outdoor commencement ceremony Thursday, as school administrators applaud them and their family and friends led a cacophony of car-horn-honks from the parking lot audience.
(Enterprise photo — Aaron Cerbone)

Thursday’s ceremony, staged in the parking lot of L.P. Quinn Elementary School, was far from ordinary, but still maintained many of the traditional elements students had requested, each tinged with the effects of the coronavirus.

Speeches revolved around the strange world graduates are entering. Many wore masks as they received their diplomas and car horns mixed with the air horns that are usually snuck into the high school gymnasium.

The gymnasium, where graduations are usually held, was not missed by many in attendance.

“It was hot, we were packed like sardines,” Brennen McComber, who graduated last year, said. “I like it out here a lot more.” 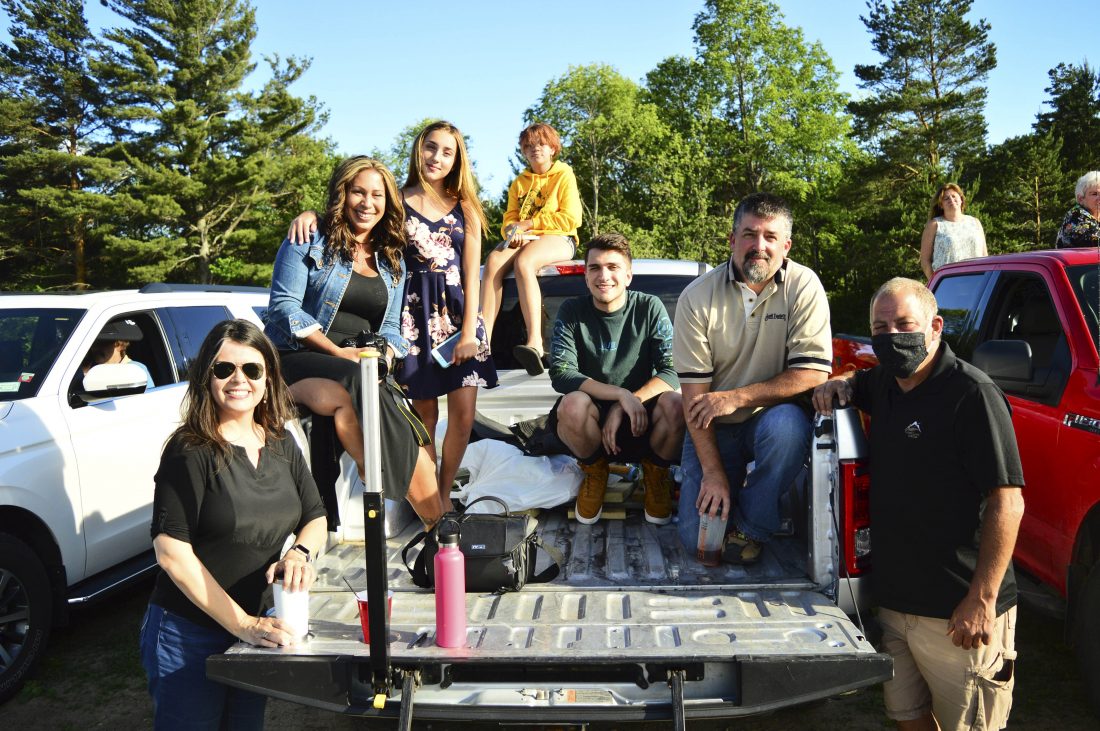 Many said they hope for outdoor ceremonies in the future, and many suggested that the football field might be a good location. Outgoing superintendent Seth McGowan said students have for years campaigned for an outdoor ceremony, and that he was glad to finally do one. The weather was perfect, he said, which had been his main concern.

Students sat before a stage with a projector screen, set up by Good Guy Productions, which filmed and live-streamed the event. Behind the graduates, family and friends sat in cars, listening over the radio while beeping and cheering loudly. 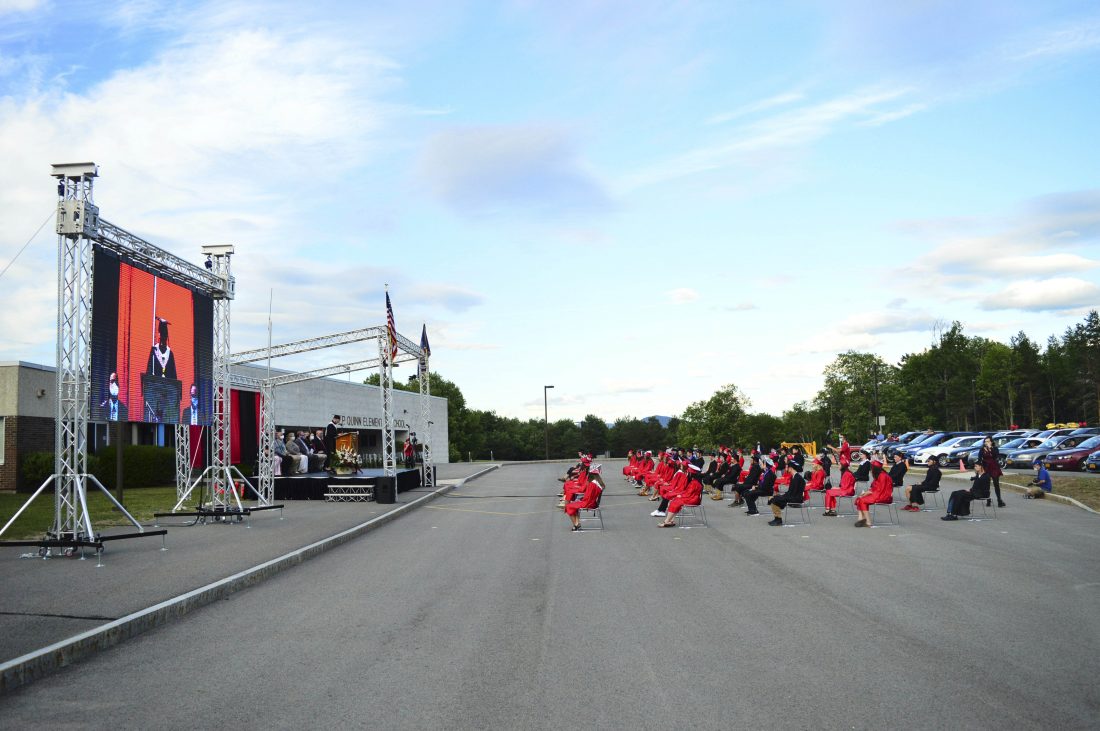 Seniors of Tupper Lake High School assemble in their elementary school parking lot Thursday for their graduation ceremony, with friends and family watching on from cars behind them.
(Enterprise photo — Aaron Cerbone)

Senior class Vice President Ava Cuttaia said although the end of their final school year was not ideal and that a lot of changes were made for a last-minute graduation plan, she felt the school and all of Tupper Lake came together to make them feel special.

“I’ve never seen my face around town so much,” Cuttaia said, referring to the lawn signs with seniors’ faces planted around town.

“I think the most important thing I’m never going to forget is this ceremony,” salutatorian Logan Dominie said.

Dominie said he and his friends are all going out to be new people, but that they have all been shaped by their parents, families, school and classmates here in Tupper Lake.

Valedictorian Stephanie Fortune said she preferred to share memories with her fellow classmates, instead of advice. She said it is the little things she will miss the most. Some memories were universal, like waiting to double space an essay to meet the page requirement after writing it. Some were more specific to Tupper Lake, like the “free the ranch” incident. 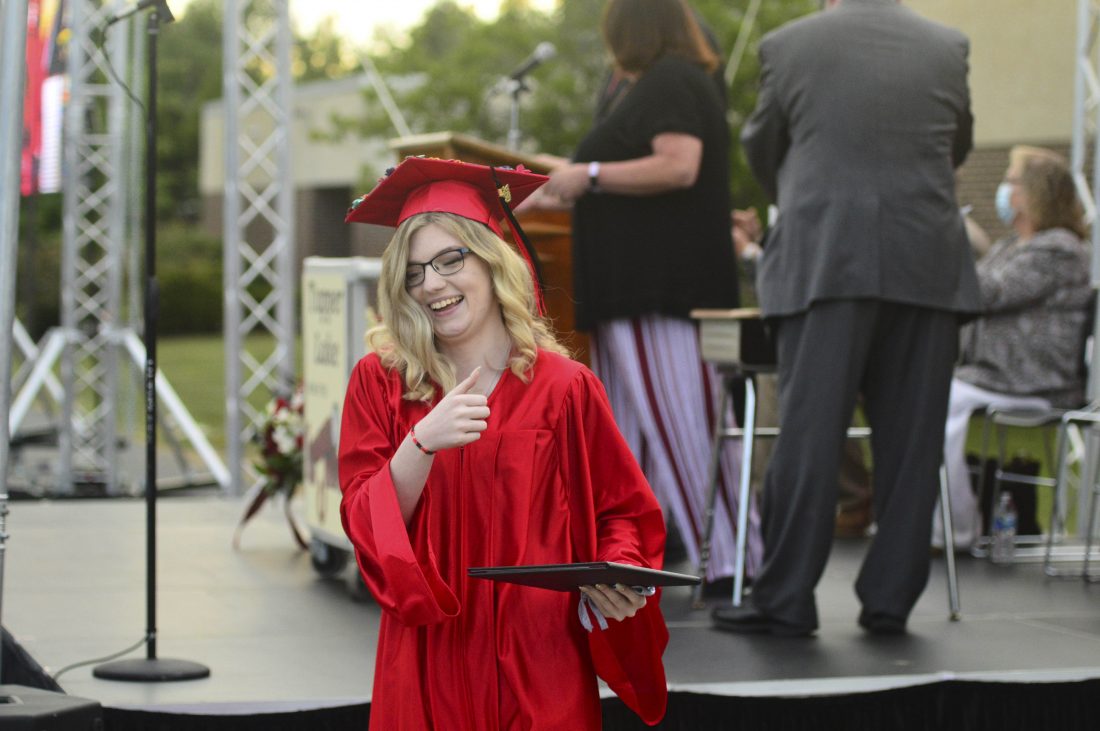 Kaylee Rabideau gives a grin and a thumbs-up as the departs the graduation stage Thursday. She had faltered on the step, but caught herself, and wanted her family watching from their car to know she was OK.
(Enterprise photo — Aaron Cerbone)

Fortune walked the crowd through her class’s childhood, describing their emotions, growing moments and clothing choices along the way.

She said though they are starting to make “terrifying life-altering decisions,” they should be confident in their upbringing and set their goals high.

She said phrases like “YOLO” (you only live once), “all or nothing,” or “full send or no send,” might be cliche but that they are true.

Fortune said that all of them at some time have said they can’t wait to leave Tupper Lake, but what she looks forward to most is coming back to town on winter break next semester.

McGowan gave his last commencement address, his final public act as superintendent before he retires this summer. He traditionally takes a photo of the assembled students and posts it to Facebook from the stage, but this year a simple photo could not hold all the students and cars, spaced apart. 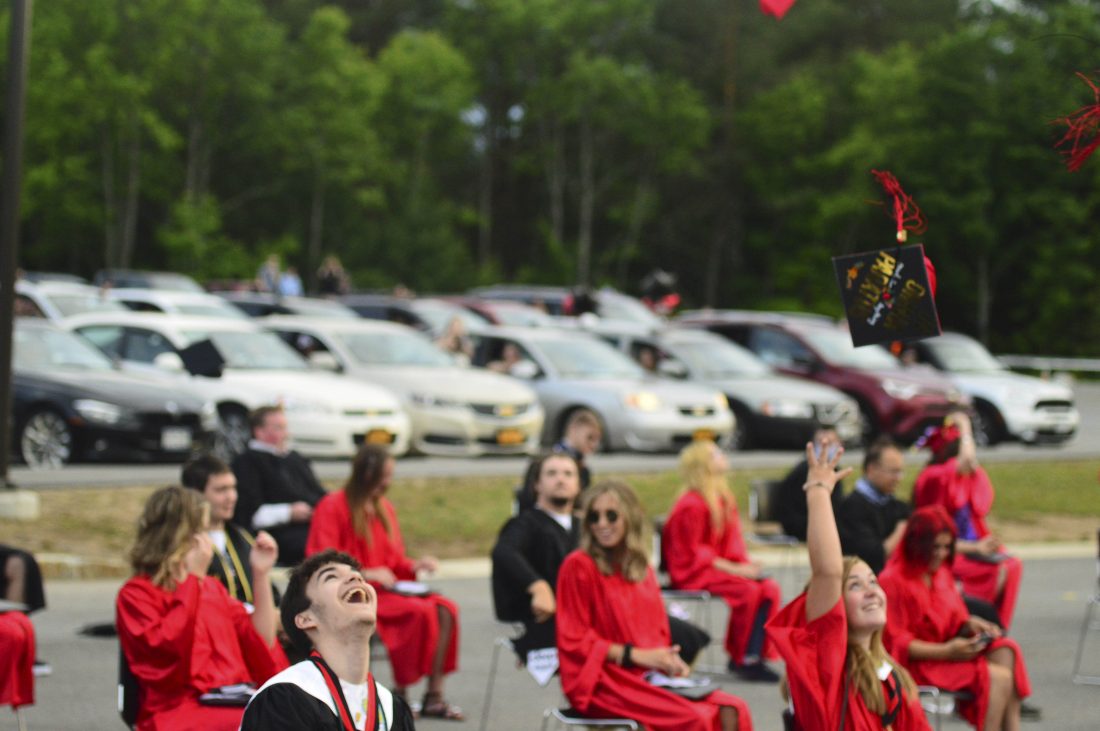 Graduates of Tupper Lake High School throw their caps sky-high — literally — while their family and friends in the parking lot behind them laid on their horns.
(Enterprise photo — Aaron Cerbone)

He struggled with the phone for a second, switching it to video mode, and as he brought it up to film one student shouted “Yeah, Mr. McGowan!” at the top of his lungs.

McGowan said he does not like the phrase “new normal” preferring to think of the post-pandemic world his students will grow up in as a “new beginning.” He said their actions will create a new world.

Families were happy to have a graduation ceremony to attend, but many had suggestions they would have liked to have seen implemented to improve the event.

The main complaint was the difficultly at seeing the screen or stage. They had hoped select family members might have been able to sit up front, close to the graduates, like plans at other schools allowed for. For the trucks parked in the back, family who could not climb inside the bed or who were shorter struggled to see the screen.

The other main issue was the masks. Students wore them whenever they were walking, including across the stage, which was loosely adhered to.

Melissa Bradley said she did not believe the masks were necessary in the outdoor setting.

“If we were indoors, I could see why, but we’re outdoors,” Bradley said. “My memory is going to be a picture of my kid with a mask on.”

Most parents said the students did not care much about the format and were glad their requests to walk on the stage and be with friends were met, albeit with some extra rules.

“Having the graduation, I think, was a big deal for everybody, having that recognition,” Jim Ellis said.

The outdoor venue came as a welcome location for some.

“This is much cooler, literally and figuratively,” Jesse Fletcher said. “They should have done this a long time ago. I’ve enjoyed some of the experiences that we’ve gotten out of COVID-19. Some of the ideas that have come out of this have been pretty good.”

However, Herb Kentile pointed out that he remembers seeing snow in July more than a decade ago.

Despite the difficulties, Tupper Lake’s commencement ceremony was a sunshine-filled event of honks, laughs and sharing memories.

“There’s so much that happens in this school,” McGowan said. “It’s kind of nice to tell those stories.”

Today’s breaking news and more in your inbox


SARANAC LAKE — The village has learned it cannot use a $920,000 Community Development Block Grant to replace the …

A biracial woman says she was set on fire in Wisconsin. Authorities are now...
Scroll to top